By Claire Wilson, 21 April 2017
Posted in: Copywriting, In the news 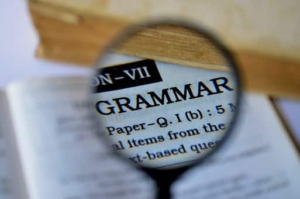 Earlier this month, BBC 4 featured an interview with Bristol’s self-styled “grammar vigilante”, who makes a hobby of correcting street signs and shop fronts with emergency apostrophe surgery. He works in the dead of the night with a customised tool, the “apostrophiser”, taking care to match the font and colour of the sign in question.

His 14-year crusade piqued the interest of media outlets across the UK, who were charmed by his cheeky yet pragmatic response to the scourge of poorly-placed apostrophes blighting signs across Bristol. As a new resident of Bristol and an apostrophe aficionado, I confess to feeling some admiration and pride: “Yep, we’ve got a grammar vigilante, ‘cause that’s how we roll in Bristol!” *insert smug head toss here*

In fact, I’ve been surprised by the number of my family and friends across the country who have seen the story and mentioned it to me in the last month. However, their response has not always been as positive as my own, with some wondering what the big deal is, and whether correcting other people’s writing is pointless pedantry and *gasp*… maybe a little bit rude.

This is a conversation I’ve often had with my husband, who has suffered more than his share of unsolicited corrections (turns out being married to a communications professional is not all sunshine and lollipops). He often asks plaintively, “But you knew what I meant, so why does it matter?”. And my answer, invariably, is: “Yes, this time, this time! Who knows what the unintended consequences might be next time??!?”. *husband’s eyes roll skyward*

All joking aside, there is a very good reason for grammar and punctuation in any language, and it’s not just to make those of us who paid attention in school feel smug. They are crucial tools in giving our writing clarity and emphasis where needed. I’ve included my favourite amusing examples here. 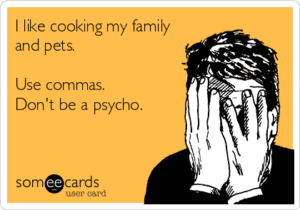 All are correct, depending on what you’re aiming to do…but I think you’ll agree the commas are important.

Here’s another example from the internet:

Do you hear the difference? What about this: “Yes!”

You see what we did there? That’s punctuation for you.

In more serious examples, misplaced or omitted punctuation can be central to legal disputes. The Guardian reported a case in March where the absence of an Oxford comma (also known as the serial comma) resulted in the awarding of overtime pay to a group of delivery drivers who would not have been eligible if only a comma had been used to indicate that “packing” and “distribution” were viewed as separate activities under state law.

Another well-publicised example is the dispute between Rogers Communication of Toronto and telephone company Bell Aliant.  In this case, the inclusion of an extra comma allowed Bell Aliant to end an agreement worth approximately $1 million (CAD).

Closer to home, a more prosaic reason to polish your punctuation and groom your grammar is that first impressions count. And, in the information age, often what somebody reads about you is that first impression. Whether it’s a restaurant menu, an online portfolio or a business website, poor use of punctuation, grammar and spelling can instantly colour someone’s perception of you. Although your audience might “know what you mean”, poor grammar can be interpreted as a lack of attention to detail which could influence their decision to do business with you.

Work to be done…

I’ll admit that I could relax my unforgiving standards somewhat around the house, but I remain adamant that correct punctuation and grammar is incredibly important in making sure we communicate with meaning and impact. So, a grammar vigilante taking to the streets to show us how apostrophes should be done is an important public service, in my view. One that will become more important, not less, in the digital age, as how we write about ourselves and communicate with each other become paramount.

It’s safe to say, from a quick walk around the town centre, it seems there is still a lot of work to keep our grammar vigilante busy for some time.